Review of LEGEND by Marie Lu

Last night I finished a truly fantastic book: LEGEND by Marie Lu. LEGEND is the first book in a dsytopian trilogy for YA readers. And can I just say...I've found a new series to obsess over.

The book is told from alternating viewpoints. First from a criminal's perspective. Then from a high-ranking military woman's perspective. Both points of view have genius IQs, lightning fast reflexes, and plenty of tragedy in their backgrounds.

Here's a quick summary of the plot:

What was once the western United States is now home to the Republic, a nation perpetually at war with its neighbors. Born into an elite family in one of the Republic's wealthiest districts, fifteen-year-old June is a prodigy being groomed for success in the Republic's highest military circles. Born into the slums, fifteen-year-old Day is the country's most wanted criminal. But his motives may not be as malicious as they seem.

From very different worlds, June and Day have no reason to cross paths - until the day June's brother, Metias, is murdered and Day becomes the prime suspect. Caught in the ultimate game of cat and mouse, Day is in a race for his family's survival, while June seeks to avenge Metias's death. But in a shocking turn of events, the two uncover the truth of what has really brought them together, and the sinister lengths their country will go to keep its secrets. 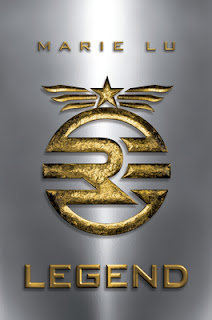 I enjoyed LEGEND so much because, frankly, the story's impossible. The things some of the characters do are impossible. But that's what makes it so great. These two teenagers take on odds even more staked against them than what Katniss faces in the HUNGER GAMES. I liked that because it was refreshing. Lu makes you believe in the impossible.

Her writing and storyline struck me as a mesh between the dsytopian YA books that are all the rage now and Japanese manga or anime.

The only flaw I saw with the first book was that at times I didn't believe Day--the criminal--was actually a male. He read much more like a female to me, but I'm looking forward to starting PRODIGY, the second book in the trilogy, to see how Lu's writing has matured.

Don't forget to tell all your friends to join my nightmare army (my followers)! We still need to recruit about ten more people in order to make the raffle for an advanced reader's copy of PRODIGY happen in December.

Have you read LEGEND? What did you think about it? Did it inspire you?