Review of SCARLET by Marissa Meyer

I just finished Marissa Meyer's second book in the LUNAR CHRONICLES. In this story, we not only catch up with Cinder, but we also meet Scarlet...a fiery, feisty redhead on a mission to save her grandmother. 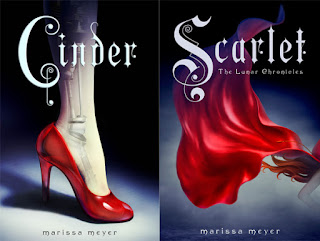 Cinder returns in the second thrilling installment of the New York Times-bestselling Lunar Chronicles. She’s trying to break out of prison—even though if she succeeds, she’ll be the Commonwealth’s most wanted fugitive.

Halfway around the world, Scarlet Benoit’s grandmother is missing. It turns out there are many things Scarlet doesn’t know about her grandmother and the grave danger she has lived in her whole life. When Scarlet encounters Wolf, a street fighter who may have information as to her grandmother’s whereabouts, she has no choice but to trust him, though he clearly has a few dark secrets of his own.

As Scarlet and Wolf work to unravel one mystery, they find another when they cross paths with Cinder. Together, they must stay one step ahead of the vicious Lunar Queen who will do anything to make Prince Kai her husband, her king, her prisoner.

And here's my review:

At first, I wasn't too keen on the book. Scarlet was incredibly abrasive at the beginning, and I found some of Meyer's word choices, especially verbs, strange--almost to the point, it seemed she was misusing them.

But I kept reading, and I'm so glad I did. Meyer's world is incredible. It's obvious she's spent a huge amount of time on her world-building, and as the book went along, the plot kept getting bigger and bigger and BIGGER. This isn't a silly teeny-bopper romance. This is a story about responsibility and war.

I also loved Cinder. Meyer does a great job of explaining what it would be like to be a cyborg. Again, the thought she'd put into this wowed me. I definitely think SCARLET should be on your 2013 YA must-read list. It comes out in February and is sure to be in-demand. Reserve your copy now. 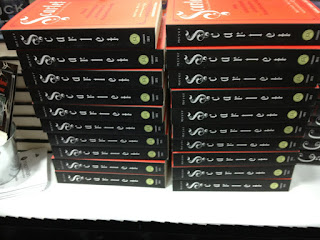 Marissa, just one question...When's the next one coming out??