Review of WHEN WE WAKE by Karen Healey

When's the last time you read a reeeallly good book? Honestly it hasn't been all that long for me because I'm a book addict and have to read a book a week or else I go into withdrawal.

But that's not the point!

The point is WHEN WE WAKE is an amazing YA read. WHEN WE WAKE is Karen Healey's third book. I haven't read GUARDIAN OF THE DEAD or THE SHATTERING, but you better believe that I will now. If you'd like to learn more about Healey, here's the link to her website.

So what's WHEN WE WAKE about? Take a look at a sneak peek at the cover and a short synopsis: 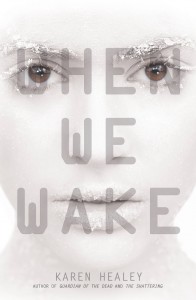 My name is Tegan Oglietti, and on the last day of my first lifetime, I was so, so happy.

Sixteen-year-old Tegan is just like every other girl living in 2027–she’s happiest when playing the guitar, she’s falling in love for the first time, and she’s joining her friends to protest the wrongs of the world: environmental collapse, social discrimination, and political injustice.


But on what should have been the best day of Tegan’s life, she dies–and wakes up a hundred years in the future, locked in a government facility with no idea what happened.

Tegan is the first government guinea pig to be cryonically frozen and successfully revived, which makes her an instant celebrity–even though all she wants to do is try to rebuild some semblance of a normal life. But the future isn’t all she hoped it would be, and when appalling secrets come to light, Tegan must make a choice: Does she keep her head down and survive, or fight for a better future?

Now that you have an idea of what WHEN WE WAKE is about, why exactly is it so great?

Healey isn't your average YA author. She doesn't push unbelievable romance. She doesn't use unexplainable mystical elements to move the plot along. Healey's done her research. The world that she portrays in WHEN WE WAKE is one that could very easily become our reality...if we are foolish enough to let it happen.

That means the world in WHEN WE WAKE is kind of terrifying. It's also a call to arms. I'm sure Healey means to inspire us with her story. She certainly did me.

Not only is the world great and plausible, but you can't help loving the main character. Tegan is personable, likeable, rebellious, and smart. She's everything I love in a heroine without being over the top or unbelievable. She's not the best at everything she does, and she knows it. But when she's good at something, she's great. And in all her endeavors, she gives 100 percent.

In truth, I didn't love the ending of the book because *Spoiler Alert* it didn't really feel like an ending. True, Tegan accomplishes something, but we never see what that accomplishment does toward changing this terrifying, sad world. We're left with the feeling that it's just not enough.

Still, the characters, the world building, and the voice are enough to make this reader give her 4.5 out of 5 stars.

Keep checking back for more reviews! I've got one of DC Pierson's CRAP KINGDOM coming up next Wednesday and after that it'll be 17 & GONE by Nova Ren Suma.

And as always, if you'd like to see a book reviewed, let me know, and I'll get my hands on it! Until next time.