I decided to review CRAP KINGDOM by DC Pierson because it's so different from the books that I usually review. If you follow my blog, you know I love anything that has fantasy, paranormal, horror, sci-fi elements to it. But I don't normally couple those things with humor.

However, DC Pierson has done that. And in my opinion, he's done it masterfully.

So what's CRAP KINGDOM about? When will it come out? Read on, readers, read on. 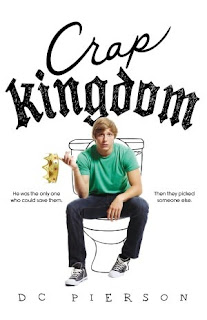 Summary: THE CHOSEN ONE MUST BE RETRIEVED FROM EARTH

HIS NAME IS TOM PARKING

With this mysterious yet oddly ordinary-looking prophecy, Tom's fate is sealed: he's been plucked from his life and whisked away to a magical kingdom to be its Chosen One.

There's just one problem: The kingdom is mostly made of garbage from Earth. Okay, well, two problems: the king hates Tom. Also, the princess likes to wear fake mustaches. And being Chosen One seems to consist mainly of cleaning out rats' noses at the Royal Rat-Snottery.

So, basically, the kingdom sucks.

When Tom turns down the job of Chosen One, he thinks he's making a smart decision. But when Tom discovers he's been replaced by his best friend Kyle, who's always been cooler, more athletic, and better with girls, Tom wants Crap Kingdom back—at any cost. And the hilarity that ensues will determine the fate of the universe.

Sound good? Want to buy it? CRAP KINGDOM is expected to come out on March 7th of this year, so you can buy it tomorrow wherever books are sold!

I really did enjoy this read, and I enjoyed it a whole lot more than I thought I would. At first, I figured the book would mostly appeal to 12-year-old boys who like penis jokes. But there's actually a lot more to the book than that.

Here are a couple quotes from the book that I liked:

1) "...there were always times when Tom's head was on the chopping block and he would learn all kinds of lessons in that moment of need, gaining the wisdom of a man whose death was imminent. And then, at the last second, his head would somehow be saved from the chopping block and he'd completely forget all the things he'd learned while it was there."

2) "Ohohohohohohohoh, I see, big adventurer. You know everything now." "I know almost nothing," Tom said. "But that's a whole lot more than nothing."

If there are any books you'd like to see reviewed, let me know, and I'll do my best to put my hands on them. Until next time!
Labels: Advanced Reader's Copies Book Review CRAP KINGDOM DC Pierson Erin York EYWriterEditor Fantasy Free Books Horror Humor Paranormal Reading Sci-Fi Writing Young Adult