Ever wonder what the world would be like if the West had stuck with Paganism instead of transitioning to Christianity? In Lili St. Crow's new book, NAMELESS, she explores exactly that.

Along with retelling the classic fairy tale, Snow White & the Seven Dwarves.

If you haven't heard of Lili St. Crow, she's also the author of bestselling series Strange Angels. You can visit her website here.

Her newest book, the start of a trilogy called Tales of Beauty and Madness, comes out of April 4th. So what's it about? And should you buy it?

Read on, readers. Read on.

Here's a sneak peek of the cover of NAMELESS and a short synopsis. 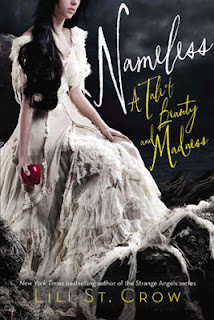 When Camille was six years old, she was discovered alone in the snow by Enrico Vultusino, godfather of the Seven—the powerful Families that rule magic-ridden New Haven. Papa Vultusino adopted the mute, scarred child, naming her after his dead wife and raising her in luxury on Haven Hill alongside his own son, Nico.

Now Cami is turning sixteen. She’s no longer mute, though she keeps her faded scars hidden under her school uniform, and though she opens up only to her two best friends, Ruby and Ellie, and to Nico, who has become more than a brother to her. But even though Cami is a pampered Vultusino heiress, she knows that she is not really Family. Unlike them, she is a mortal with a past that lies buried in trauma. And it’s not until she meets the mysterious Tor, who reveals scars of his own, that Cami begins to uncover the secrets of her birth…to find out where she comes from and why her past is threatening her now.

On Goodreads, I gave the book 3 out of 5 stars. I think Crow's creativity overwhelmed this novel--the world she's composed is familiar, yet alien and incredibly engrossing.

However, I didn't care much for the main character until the very end of the book. I got tired of her stuttering problem, and on a different note, I got tired of the number of adjectives that stifled what might have been a pretty good story, otherwise. At one point, I wished I'd tallied how many adjectives she uses. I bet the list would stretch from one end of the US to the other.

The prologue opens in first person, but the main character continually refers to herself in third person. Then in chapter one, we slip into second person. I'm sure Crow wants to seem literary, but frankly, I don't understand how these issues slid past her editors.

But the story was strangely intriguing. I kept reading, despite these quirks. And at the end, I even got a little weepy-eyed as the main character finally finds where she belongs.

So I'm not much for main characters who need to be coddled, and I'm not much for glam and extravagance in books. But I know those elements draw a lot of people in, and if that's your thing, then Crow's book is the April read for you.

Will I read the next volume in the trilogy? That depends. If I have time in my reviewing schedule and get an ARC, then sure. If not, I probably won't look back.

Again, NAMELESS comes out of April 4th and can be found in bookstores, libraries, and, of course, all over the web.

See you next week when I'll be reviewing WHITE LINES by Jennifer Banash. Sneak Peek: I'm about a hundred pages in and really enjoying it.