Review of THE BEAUTIFUL AND THE CURSED by Page Morgan

I've always wanted to read a great romance with gargoyles! If supernatural creatures were real, my first pick of a lover would be a zombie. Gargoyles definitely make the top 5. (I know. I'm morbid. Now you know what kind of books I'm working on.)

And THE BEAUTIFUL AND THE CURSED, Page Morgan's debut novel, has some steamy human/gargoyle scenes. So when can you get your hands on this title? May 14th, 2013. Visit Morgan's website here to learn more info.

Besides my review of the book, I've also got a summary of the plot and a sneak peek of the cover, so read on, readers, read on! 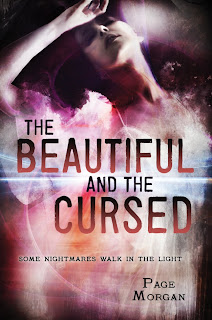 It was bizarre and inexplicable, and after it happened, Ingrid Waverly was forced to leave her life in London behind. She had to trade a world full of fancy dresses and society events for exile in gothic Paris with her mother and her younger sister, Gabby.

In Paris there are no grand balls or glittering parties, and disturbingly, the house rented by Ingrid's twin brother, Grayson, isn't a house at all. It's an abbey. A creepy, old abbey with a roof lined in stone gargoyles that could almost be mistaken for living, breathing creatures.

And to top it all off, Grayson is missing.

Yet no one seems to be concerned about Grayson's whereabouts save for Luc, a devastatingly handsome servant who has some deep and dark secrets of his own.

There's one secret about the city that even Luc can't keep hidden, though: there's a murderer on the loose. And every day that Grayson is missing means there's less chance he's still alive.

Ingrid is sure her twin isn't dead—she can feel it deep in her soul—but she knows that he's in grave danger, and that it's up to her and Gabby to find him before all hope is lost.

And yet the path to him is more dangerous than she could ever imagine.

So should you reserve a copy of THE BEAUTIFUL AND THE CURSED?

I think this book is one that will delight readers--teens or adults. This may be Page Morgan's first novel, but she's got the imagination and world-building skills to make sure she gets a deal for another.

Will I read the next book when it comes out?

If I get an ARC, I certainly will.

I loved the world, the characters, and the story Morgan created so much that the minor flaws--word choices (double verbs), certain word usage that most experienced novelists avoid (dead verbs and such), and some sentence structure repetition--didn't distract me for long.

I admit I went into the novel apprehensively. I normally don't like books about spoiled, rich girls. But Morgan's spoiled girls have personality and SPUNK. They read like real girls, and I love that.

I also liked the love interest, human and otherwise.

I felt slightly gypped by the ending. What exactly was it that the characters accomplished in the first book, except fuel us toward the next? But I enjoyed the rest of the read so much that I didn't mind the somewhat anticlimactic climax. At least there WAS a clear climax, unlike in Speer's new book, NATURAL BORN ANGEL.

So if you're looking for a book to take to the lake or to curl up with on a relaxing rainy day, I definitely recommend THE BEAUTIFUL AND THE CURSED.

Again, buy it wherever books are sold on May 14th, 2013, or better yet, preorder a copy. I bet this book goes fast. And the movie's only a deal away...

Next Wednesday, I'll be reviewing SPIRIT AND DUST by Rosemary Clement-Moore, another Delacorte book with a cover very similar to this one. And as always, if you'd like to see a book reviewed, whether it's out now or not, leave a comment, and I'll do it!

See you next week.