Review of A GATHERING OF WINGS by Kate Klimo

Are you a fan of Tamora Pierce? I fell deeply in love with fantasy after reading her LIONESS quartet. (And now we're Facebook friends!) So naturally when I saw that Tamora Pierce read and reviewed A GATHERING OF WINGS by Kate Klimo, I knew I'd have to do the same.

For a sneak peek of the cover, a summary of the plot, and my thoughts about the book, read on, readers, read on. 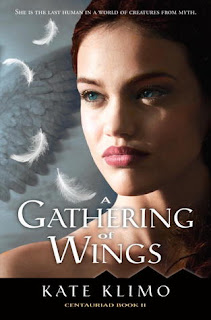 In A Gathering of Wings, Malora leaves the safety of Mount Kheiron for the bush and the bustling city of the Ka in search of Sky, the stallion who used to lead Malora's herd of horses. Accompanied by her closest friends, Malora is faced with making decisions about her future in new ways.

As for my review, I wish Klimo could have written this book about ten years ago. Because if you're any older than 13, the book may not hold up for you--I definitely don't think that it should be marketed as young adult fantasy, especially since so many adults read YA.

So I'm going to call this a middle grade novel and review it as such.

For young readers, I'd give this fun, quirky, sweet adventure story 4.5 stars on Goodreads. If you're in that target readership or know someone who is, especially if you or your loved one can't get enough of horses, then book II of the Centauriad series is for you.

Though to me, the science behind the fantasy didn't make sense--such as why hybrid creatures would be mating with hybrids of a different sort and why humans would create hybrids and allow them to take over the Earth--and I felt the same way about the way the plot developed, I wasn't ever bored. I kept turning the pages, and I definitely liked all the characters. We have a plucky main character and an entourage of other interesting personalities.

The writing was generally clean and flowed well, though sometimes I felt the Klimo told rather than showed, and I wondered if the story would have read better were it told in past tense, instead of present.

BUT I don't think most young people would notice these small flaws, or care. As well they shouldn't have to. Klimo tells a good, clean story that I'm sure I would have eaten up in middle school. Again, if you know someone in this age group, or are a kid at heart, then go for it!

It's a perfect summer read. I'll probably go back and read the first novel as well as read any subsequent novels that Klimo writes, just as I read all of Pierce's new books for old time's sake.

A GATHERING OF WINGS will be available wherever books are sold on May 28th, 2013. Pre-order a copy now to avoid the rush of Klimo's avid fans of which I'm sure there are many.

I'll see you next Wednesday, when I'll be reviewing THE SHAMBLING GUIDE TO NEW YORK CITY by Mur Lafferty. And as always, if you have a title you'd like to see reviewed, leave a comment below, and I'll get on it!
Labels: Book Review Books Erin York EYWriterEditor Facebook Fantasy GATHERING OF WINGS Kate Klimo Middle Grade Mur Lafferty SHAMBLING GUIDE TO NEW YORK CITY Tamora Pierce Young Adult