Review of SKY ON FIRE by Emmy Laybourne

Without the sun, we'd all die. It doesn't get much grimmer than that--although I could argue SKY ON FIRE, the newest addition to the Monument 14 series by Emmy Laybourne manages it. To learn more about Emmy Laybourne and her series, click here.

Before I started SKY ON FIRE, I should have done a bit more research. I thought I was picking up a short middle grade novel (It's got a school bus on the front, for Pete's sake!) that would not only be a fun and fast read, but a funny one. Laybourne, after all, is a comedian!

I had no idea what I was getting myself into...Intrigued about the plot of the book and my thoughts? I've even got a sneak peek about a possible movie for you. So read on, readers, read on. 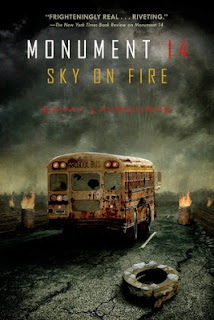 In this sequel to MONUMENT 14, the group of survivors, originally trapped together in a superstore by a series of escalating disasters, has split in two. Most of the kids are making a desperate run on their recently repaired school bus for the Denver airport where they hope to reunite with their parents, be evacuated to safety, and save their dying friend.

But the world outside is dark and filled with dangerous chemicals that turn people into bloodthirsty monsters, and not all the kids were willing to get on the bus. Left behind in a sanctuary that has already been disturbed once, the remaining kids try to rebuild the community they lost. But when the issues are life and death, love and hate, who can you really trust?

So it's always exciting to me when an author has the potential to not only write a sequel to a series but also might get a movie made. However, I'm not sure I'll go back and read the first book, and if I do decide to see the movie, it'll be at home, not at the theater. On Goodreads, I gave SKY ON FIRE 2 out of 5 stars.

Reading the first book probably would have helped me feel a little more centered in book two, but I'm a firm believer that books need to be able to stand alone. For those of us who haven't read the first book in the series, the author should fill us in on what's already gone on. I felt pretty lost at first, and I never got totally centered in the world. What exactly happened to flood the US (the world??) with killer compounds? How are we explaining the science behind some parts of the world being affected and others not? What's the white mold? How can anything be sealed enough--other than an airtight vault--that allows the characters to be able to remove their face masks?

I don't like it when questions like the ones above don't get answered. I also felt like this book was rushed. The beginning felt well edited, but the further in, the more needless repetition of words I saw. I saw hardly any variation of sentences. I had a hard time getting a feel for the setting. And I couldn't tell the voices of the two brothers apart, even though they've got three years of an age difference. It's a good thing Laybourne uses different font and labels the chapters with who the viewpoint character is because otherwise I would have been lost.

I found the world interesting, if not well-explained. And the kids were plucky. They never gave up, which is admirable. So with those elements, I decided to throw in the extra star on Goodreads.

But I won't be reading the next book in the series. When SKY ON FIRE comes out on May 28th, I recommend you save your money.

I'll be reviewing a SLEW of wonderful books in June, so wait until then to stock up on your summer reads.

See you next week, when I'll be reviewing THE TESTING by Joelle Charbonneau. Houghton Miffin's answer to THE 5TH WAVE.