Review of FAR FAR AWAY by Tom McNeal

Not too long ago, I read Philip Pullman's new book on the Grimm brothers' fairy tales. Picking up young adult fantasy novel FAR FAR AWAY by Tom McNeal seemed like a natural continuation of my fanciful 2013 reads. To find out more about Tom McNeal, click here.

Are you a fan of modern day fairy tales? I certainly am. That's why I've prepared their review, complete with the cover and synopsis of FAR FAR AWAY.  Read on, readers, read on. 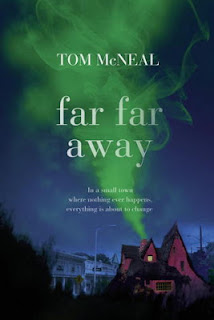 It says quite a lot about Jeremy Johnson Johnson that the strangest thing about him isn't even the fact his mother and father both had the same last name. Jeremy once admitted he's able to hear voices, and the townspeople of Never Better have treated him like an outsider since. After his mother left, his father became a recluse, and it's been up to Jeremy to support the family. But it hasn't been up to Jeremy alone. The truth is, Jeremy can hear voices. Or, specifically, one voice: the voice of the ghost of Jacob Grimm, one half of the infamous writing duo, The Brothers Grimm. Jacob watches over Jeremy, protecting him from an unknown dark evil whispered about in the space between this world and the next. But when the provocative local girl Ginger Boultinghouse takes an interest in Jeremy (and his unique abilities), a grim chain of events is put into motion. And as anyone familiar with the Grimm Brothers know, not all fairy tales have happy endings. . .

Young adult veteran Tom McNeal (one half of the writing duo known as Laura & Tom McNeal) has crafted a novel at once warmhearted, compulsively readable, and altogether thrilling--and McNeal fans of their tautly told stories will not be disappointed.

On Goodreads, I gave this book 4 out of 5 stars. Like the last book I reviewed, I wish I could have given it 4.5. The only reason I didn't give FAR FAR AWAY the fabled 5 star review is because it started out rather slowly. Though when you think about it...Most fairy tales do. However, fairy tales were--in large part--written a great number of years ago for a different audience. The modern audience has evolved to have little patience with a slow starting book.

FAR FAR AWAY is narrated by a ghost, the ghost of Jacob Grimm, as it states above. I suppose if I'm completely honest, that may be another reason why I only gave the book 4 stars. I understand many readers love a narrator, but it threw me off balance. Also, the characters seemed rather pathetic, particularly the boy that Jacob Grimm watches after.

HOWEVER, the book quickly picks up steam to the point where, when I absolutely had to put it down, I couldn't stop thinking about it. Those same characters and narrator who first gave me pause blossomed into extraordinary people that I now care deeply about. The plot has several twists and turns that I certainly didn't see coming. That makes for a great read. I love it when the author is smarter than I am!

McNeal's prose is extremely clean. I never once felt pulled out of the story, never once felt like he could have used a better editor. The book is not separated into characters; instead, it has scene breaks every few pages. At first I questioned at first but quickly forgot about.

I've already stated that I came to love the characters. Why? They're all uniquely written, as if McNeal knew these people in real life and decided they needed a story of their own. They're likable, kind, care for others, but they're also mischievous and flawed, just like the best of us. Even McNeal's secondary characters are well fleshed out, and many of them get their moment in the spotlight, which I think is generous writing on the part of the author.

And the climax! Oh, the climax of FAR FAR AWAY! It's been awhile, since a story's turn for the worst seems like an impossible obstacle to mount. And--*SMALL SPOILER ALERT*--the narrator, which I first questioned, turns out to be invaluable to a satisfying, fairy tale ending.

FAR FAR AWAY is scheduled to come out on June 11th. Really, it's worth a read, so definitely pick up a copy. I think this book will be a quiet gem that doesn't get nearly the press that it should, so help Tom McNeal out and blog/tweet/Facebook/etc. about how fabulous FAR FAR AWAY is.